Been alone too long.

It’s risky, I know.  But there are some good men on the Internet.  Good men looking for women my age.  Faded a little, but still pretty damn good looking.  Good enough to attract Lucas, a silver fox I can dream about.  Wonderful looking man, good manners, well educated, obviously.  Owns a house in Carmel by the Sea, a yacht named Valentine in the Mist, and runs his own public relations business.

Lucas says he can’t meet nice women because they’re all after his money.  Even as he laughed about that, I wondered how he could be so open and honest with me.

He sends me e-mails and texts and flowers.

He says he has actually known me for a long time, and he has adored me from afar for years and years.  What a romantic!   Nothing at all like my first husband, Walter.  Walter had money, old family money, but that was where the resemblance ended. Walter didn’t want me, he just wanted a baby machine.  He wanted sons to carry on the family name and the family estates and the family businesses.

Walter was old and looked old.  And acted old.  He even smelled old. When we were first married, he explained to me that most of his assets would be shared jointly with me until the first son was produced.  At that time, the assets would be shared between his son or sons and his family,  with a small share going to me upon his death.

I agreed this arrangement was perfectly fair and generous, and he entrusted me to deliver the document to his attorney.  Unfortunately, I was distracted and unable to complete this task.

Everyone knew Walter had a bad heart.  So when he drank too much and had a heart attack and died in the hot tub, it was never questioned.  The only surprise to the family was that he had left everything to me.

I lived well for years.  Traveled.  Never had to work.  Vacation homes.  Maybe enjoyed my cocktail hours a little too much and became a little bit blowsy.  Getting a little low in the finance department now.  Never was much good at investments.

But that’s okay.  Lucas is my new valentine.  He says he adores me and we will be together always.  I have the table set for our Valentine’s day dinner, champagne chilling, candles lit.  Now just waiting for Lucas to ring my doorbell and be one with him forever and forever.

Everything is ready, but I must find the room freshener.  What is that odd, musty smell? 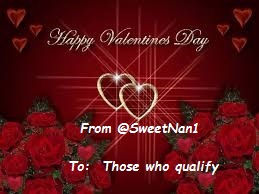